Nigerian Slay Queen and Facebook user, Funmi Adisa, has decided to take out her anger on other people’s boyfriends after she lost her boyfriend to a fellow Slay Queen.

According to her, she’s ready to do anything to get any man she wants now, and here’s a ‘memo’ of her warning;

Listen up ! I was ones in-love Wiv the nigga I luved and some slay mama came in wiv der hoes life & d stupid bf allowed der shit????.

Listen very well Slay Mama if you c me with your bf I don’t give a f–k.. Am ready to date anyone dateable and f–k anyone f–kable e fit be your guy oh shotiyee? 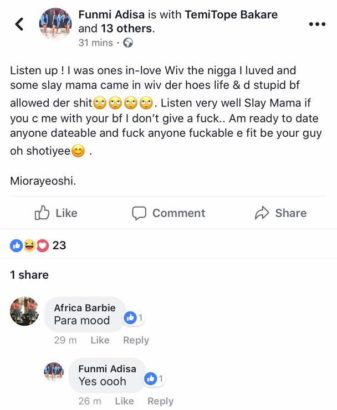 Well she has written a rejoinder, claiming it was just a ‘post’;

Wow, I cnt believe we still have some bastards in dis naija….dis is 24th century and u guys are still taking jes an update too serious ???and some scum berg dat cnt even face me one on one still gat d guts to comment rubbish on ma update???ani ori gbogbo yin ti buru???

Lol more are still coming …..my matter will kill all ur Gene???
Still gat many updates for u guys to b mad at???

Oooobi?
And dat mumu swanky or wot is she called, how sure are u that dah beautiful son u claiming to b urs is not a bastard???
Yah jes a scum berg??
Many updates are still coming ?????????????? 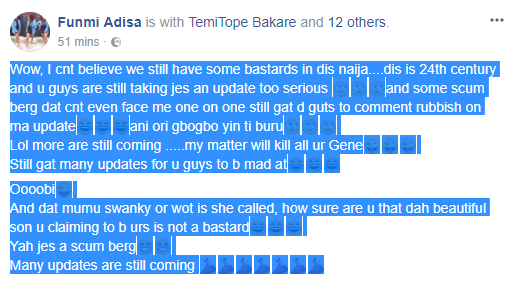 Here are some of her photos below:-